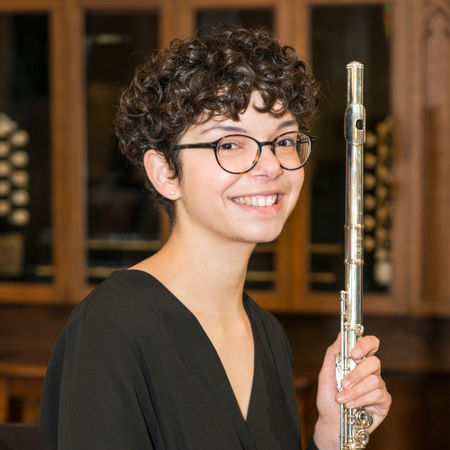 Clara Galea is currently on her third year of the Malta Philharmonic Orchestra Internship Programme, through which she performs regularly with the orchestra on flute and piccolo under the tutelage of principal flautist Rebecca Hall. She also forms part of the Malta Youth Orchestra and regularly leads the flute section as first flautist. Clara's studies in music began at the then Johann Strauss School of Music in Valletta, where she took flute lessons with teachers Ramona Zammit Formosa and Silvio Zammit. In 2012 she moved to Edinburgh, where she lived for five years to compete both her Bachelor of Music and Master of Music studies. At Edinburgh Napier University, Clara studied with flautist Andrea Kuypers, and wrote her undergraduate dissertation under the supervision of composer Dr Katrina Burton. As a postgraduate, Clara studied Musicology at the University of Edinburgh with leading researchers such as Prof Peter Nelson, Dr Benedict Taylor and Dr Elaine Kelly. In her final dissertation, supervised by composer and theorist Prof Peter Nelson, she chose to focus on soundscape composition, a subcategory of electroacoustic music that brings together music, culture and the environment.

Clara studied abroad as a recipient of both the Ian Tomlin Napier/Malta Scholarship and the Malta Arts Scholarship. Clara has also attended several flute masterclasses over the years, some of the most significant of which include Andrea Oliva at the Ticino Musica Festival in 2019, the Galway Flute Festival in 2018 with Sir James and Lady Jeanne Galway, Othonas Gkogkas in 2018 and Katherine Bryan in 2012. Clara has also taken part in diverse musical activities both in Malta and Scotland. The most memorable include a flute and piano recital with Gisèle Grima in June 2019, touring abroad with the Malta Philharmonic Orchestra, performing with the National Youth Orchestra of Scotland in China, and performing with duo partner Laura Cioffi (Duo Aulos) as soloists with the Edinburgh Napier Chamber Orchestra.