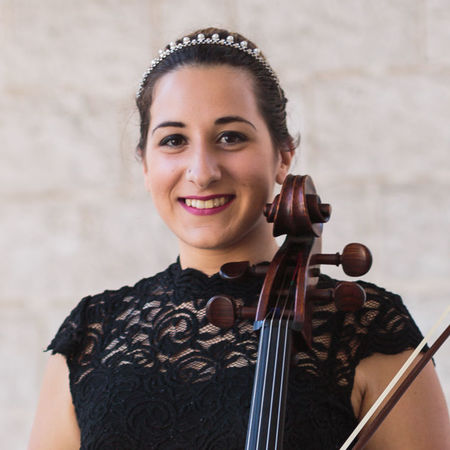 Desirée Quintano began her musical studies with Mario Psaila at the age of five later obtaining the Licentiate of the Royal School of Music (LRSM) through the direction of Peter Flanagan. She participated in masterclasses led by Iagoba Fanlo, Narek Hakhnazaryan, Alison McGillivray, Alan Rafferty, Peter Stark and David Watkin. She is the cello section leader of the Malta Youth Orchestra and was on an internship programme with the Malta Philharmonic Orchestra between 2016-2018 with whom she toured in Germany, Vienna, USA and Russia. She also performed with international orchestras including the Commonwealth Youth Orchestra in London, playing for HM The Queen, with BISYOC orchestra in England and Norway, and in 2015 travelled to Bayreuth, Germany to play in a symphony orchestra for the 65th Young Artists Festival. In 2016, she was chosen to participate in the European Union Baroque Orchestra (EUBO), an intensive course in Baroque music held in Luxembourg and also played with the Stoneleigh Youth Orchestra (Slovenia) in 2017. Desirée performed in a side-by-side concert with the Royal Concertgebouw Orchestra in 2018 as well as side-by-side with the Bournemouth Symphony Orchestra and the Philharmonia Orchestra in 2019.

As a chamber musician, she performs regularly with the Malkonia String Quartet which together they have won the 2019 John Barbirolli competition. Desirée was also given the Bibby Award by the worshipful Company of Cutlers for 2018/19 in the UK.

Currently Desirée is in her postgraduate studies in cello performance at Trinity Laban Conservatoire in London as a Trinity College London Scholar under the guidance of Naomi Butterworth and previously with Richard Markson. She is very grateful for being generously supported by the BOV Joseph Calleja Foundation, Janatha Stubbs Foundation and The Malta Philharmonic Orchestra Scholarship Scheme.

She also graduated with Bachelor of Arts in History of Art and Maltese in 2015 and Master of Arts in Baroque Studies in 2016 at the University of Malta.