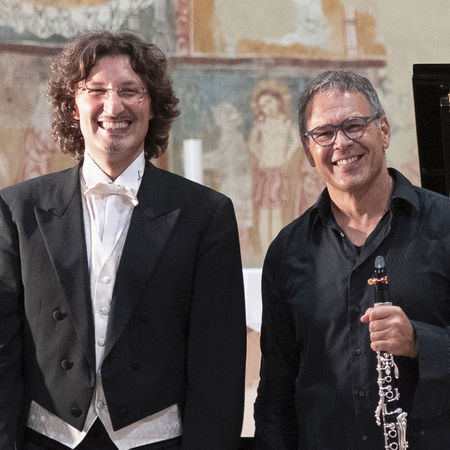 The DUO, with an extraordinary charisma and capacity of involvement in their concerts, has emerged on the international scene with the monograph recording dedicated to Johannes Brahms, including two Sonatas op.120 no.1 and no.2 and the Trio op.114 with the cellist Giorgio Casati. The CD, available on Amazon.com and iTunes, is published by Phoenix Classics with international distribution by Ducale Dischi, defined by the historical first clarinet of the Philharmonic Orchestra of Berlin Karl Leister as “magnificent interpretation” and was awarded with 5 stars by the Italian national magazine "Musica". Extraordinary confirmation of the critics has also been achieved by the CD “..Rigor y Pasión..” published by DAD Records, in which the Duo proposes music recorded worldwide preview by the Italian-Argentine composer Sergio Calligaris: “..immediate eloquence and gripping over the audience certainly.” (L. Segalla - Musica).

Since 2008 they have started an exceptional artistic collaboration with the legendary German clarinettist Karl Leister by giving their first performance at the Chamber Music Festival in Chieti. In 2012 will be released a CD of the Trio Leister-Tinelli-Mazzoccante, recorded and published by Camerata Tokyo, as the only recording of the extraordinary career of the great Karl Leister dedicated to this chamber ensemble two clarinets and piano.