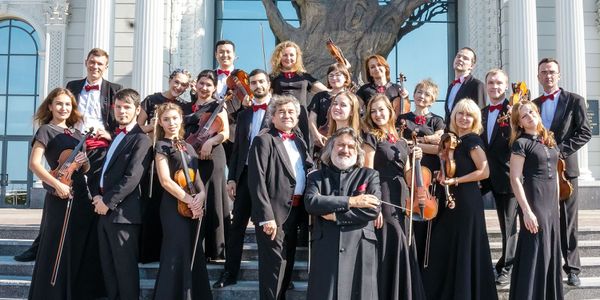 «If Kazan did not have such an orchestra, it would have to be invented», said one of the guests of the capital of Tatarstan. Kazan Chamber Orchestra La Primavera appeared in 1989, out of enthusiasm of  Rustem Abyazov - the conductor and musicians. A small group of students from the conservatory and a young director of a special musical school gave their first concerts at Kazan University. And quite soon the new group became very famous all over Kazan. Today La Primavera orchestra is one of the best creative ensembles in Russia. Its repertoire includes more than 2000 works by Western European, Russian and Tatar composers from baroque to jazz.

La Primavera gave concerts in the Great Hall of the Conservatory, the Tchaikovsky Concert Hall, the Rachmaninoff Hall (Moscow), the Moscow International House of Music, the Glinka Hall of St. Petersburg Philharmonia, and the Organ Hall of the Perm Philharmonia. The orchestra performed in Germany, Sweden, Switzerland, France, Tunisia, Greece, Israel, China, Turkey, and South Korea, always getting a warm welcome from the public and approval of music critics. In 2018 the orchestra took the Trans-Siberian train trip, giving 13 concerts in the cities of Transsib.

La Primavera gives its own international festivals in Kazan. These are: «Abyazov-Festival» dedicated to synthesis of different cultures; and L'arte del arco («Art of the bow»), which annually introduces public to the work of best contemporary performers of string and bowed instruments.

«La Primavera is one of the best orchestras not only in Russia. I am always amazed by the way they work, by their professionalism and quality of their sound», says the Italian violinist - Domenico Nordio. «Brilliant musicians», - says Gilles Apap. «I have never seen such a large and diverse repertoire for a chamber orchestra. Besides, everything is clear, everything works, everything is always in place», - comments Mark Drobinskiy - the cellist. «One has been admiring the orchestra for many years. The orchestra has a huge repertoire, it is able “to fit” into any soloist, in any musical style», - the Russian radio station «Orpheus» reports in the review. «Every day of the festival L'arte del arco music sounded at the highest level, undoubtedly it would enrich the best stages of the world», - writes the newspaper «Musical Review».

The orchestra actively gives charity concerts to help children's funds. Every year the orchestra organizes a program for talented students from children's musical schools to support young musicians, the name of the program is «Stars from Tomorrow». It actively promotes the work of contemporary composers.

Rustem Abyazov is a founder, permanent art director and chief conductor of the orchestra, an honored artist of the Russian Federation and the Republic of Tatarstan, a national artist of the Republic of Tatarstan, a laureate of the State prize named after G. Tukay, «Conductor of the Year» according to the All-Russian newspaper «Musical Review» (2002), and an honorary citizen of Kazan.