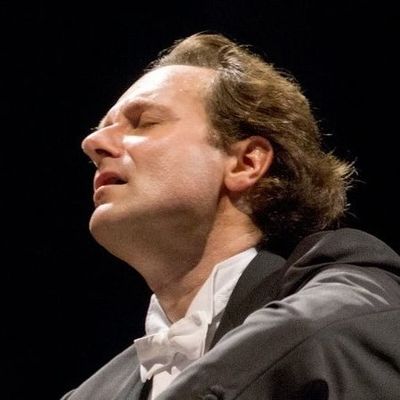 Massimiliano Caldi (Milano 1967), graduated in piano, composition and orchestra conducting has a big international experience in the felds of symphonic music, opera, operetta and ballet as well as an attention on contemporary music and on the revival of the 19th century opera. he stands out for his high professional preparation and for his bright and linear directorial style. Among the last commitments of the 2020/2021 season, the debut of Il Don Bucefalo at the Baltic Opera in Gdańsk, the recorded concert at the Teatro alla Scala with I Virtuosi del Teatro alla Scala, the Polish premiere of the cello concert of Castelnuovo-Tedesco with Silvia Chiesa and the inauguration of the 60th Łańcut International Festival. Moreover, during the summer 2021, in Italy he conducted the Roma 3 Orchestra in a tour and he also performed at the closing evening of the frst edition of the International Festival Accordi Musicali. In Poland, he performed at the Mozart Festival and at the National Philharmonic in Warsaw for the Polish Music Competition. Winner of the frst prize at “G.Fitelberg” International Competition (1999), Caldi i s the Principal Conductor of the "A. Malawski" Precarpathian Philharmonic of Rzeszów. He had been President of the Jury of the International Piano Competition Massarosa - IX and X edition (2018 and 2019), teacher of the Florence Conducting Masterclass (2015-2017), Principal Conductor and Artistic Consultant of "St. Moniuszko" Koszalin Philharmonic(2014-2017), Artistic Director of Silesian Chamber Orchestra (Katowice, 2006-2010) and  Principal Conductor of "Milano Classica" Chamber Orchestra (1998-2009).

During the 2018 year, in opera feld, he conducted the prologue from Mefstofele by Boito (Gdansk, June 2018) Cavalleria Rusticanaby Mascagni (Rzeszow June 2018) and Bastiano e Bastiana by Mozart (Oliwa August 2018).

He took part in the past at "Festival Terre Verdiane" in Busseto (Italy) with "Rigoletto" and "La Traviata" and he conducted Verdi's "Il Trovatore" at Szeged Opera House, (Hungary) at the end of the Nineties.

For the same cycle, he conducted Nino Rota's "I due timidi" and "La Notte di un nevrastenico" at Vittorio Veneto and Como Opera Houses (Italy). In Poland, at Cracow Polish Music Festival in 2011 he conducted Poniatowski's "Pierre De Medicis", a XIX century "grand opera", in the frst world performance, after rediscovering.

Caldi has recorded for Acte Préalable, the CD Raul Koczalski - Piano concertos (January 2018) and for Sony Classical, the CD Mario Castelnuovo-Tedesco, Gian Francesco Malipiero, Riccardo Malipiero Cello concertos (April 2018). Massimiliano Caldi is the only Italian who won the Gazzetta Italia Prize - 2018 edition for having distinguished in the promotion of Italian music in Poland and the Polish one in Italy.

In 2020, Maestro Caldi discussed his PhD thesis entitled "Cavalleria Rusticana by Pietro Mascagni: fdelity to the text or performance tradition?" At the Musical University "F. Chopin" in Warsaw, on which he has worked in the last 3 years, consulting among other things some manuscripts at the "S. Cecilia" Conservatory in Rome and at the Stanford University Music Library in California.