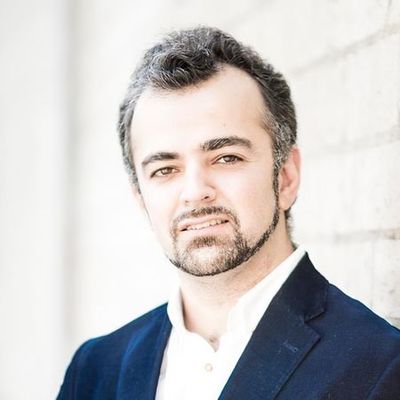 Born in 1983, Conductor Valid Ağayev is originally from Baku, Azerbaijan.   Valid Ağayev attended a specialized music school, and then studied violin at the State Music  Academy in Baku and earned a Bachelor of Music cum laude in 2006. In 2008, he  achieved Master of Music also with honours. During his studies as a violinist in Azerbaijan,  Valid Ağayev took the opportunity to take master classes with world famous musicians, as M. Rostropovich, D. Sitkovetsky and M. Vengerov. From 2004 to 2010, Valid Ağayev was  a leading violinist and a soloist of the "Gara Garayev" Azerbaijan State Chamber Orchestra.  As part of this activity, he led concert tours to Germany, France, USA, Japan, South Korea,  Italy, Poland, Turkey, Sweden, Belgium, Russia and Ukraine.   From 2012 to 2017 Valid Ağayev studied conducting at the High School of Music and Dance  in Cologne; first with Professor Michael Luig and later on with Professor Alexander Rumpf.   Since January 2014 until July 2020, Valid Ağayev has been working as a Conductor and  Artistic Director of the Attendorn Chamber Orchestra. In this capacity, on numerous occasions  he attracted exceptional soloists such as Oleksiy Semenenko (2nd prize Queen Elisabeth  Competition 2015), Koryun Asatryan (Echo-prize 2005), Gerhard Vielhaber, Shengzhi Guo...

At the end of 2016, he successfully passed his final conducting exam with honours. As part of  his studies, he regularly led the Philharmonic Südwestfalen in Cologne and other cities in  Germany.

Since 2017, Valid Ağayev has been invited regularly as a guest conductor to different types of  concerts with the Orquesta Clásica Santa Cecilia. In April 2017, he flew to Madrid on short  notice to perform with the orchestra for the first time, and then later in May to perform at the  scene of Auditorio Nacional de Música.

In November 2017 he shared the stage with the Orpheus Public Award winner, pianist Nikolai  Tokarev (Orpheum Public Award 2006) and the Ukrainian National Symphony Orchestra in  Kiel.

In December 2019, Mr. Ağayev worked very successfully with the Azerbaijan State Chamber  Orchestra and then he went to Kazakhstan to work with the world famous violinist Shlomo Mintz and "Academy of Soloists of Kazakhstan" in Nur-Sultan.

Since 01.01.2021 Mr. Ağayev works as Associate Professor in Çukurova State Conservatory  in Adana, Turkey and continues to perform as a guest conductor in Europe and Asia.